What We Love About Macau 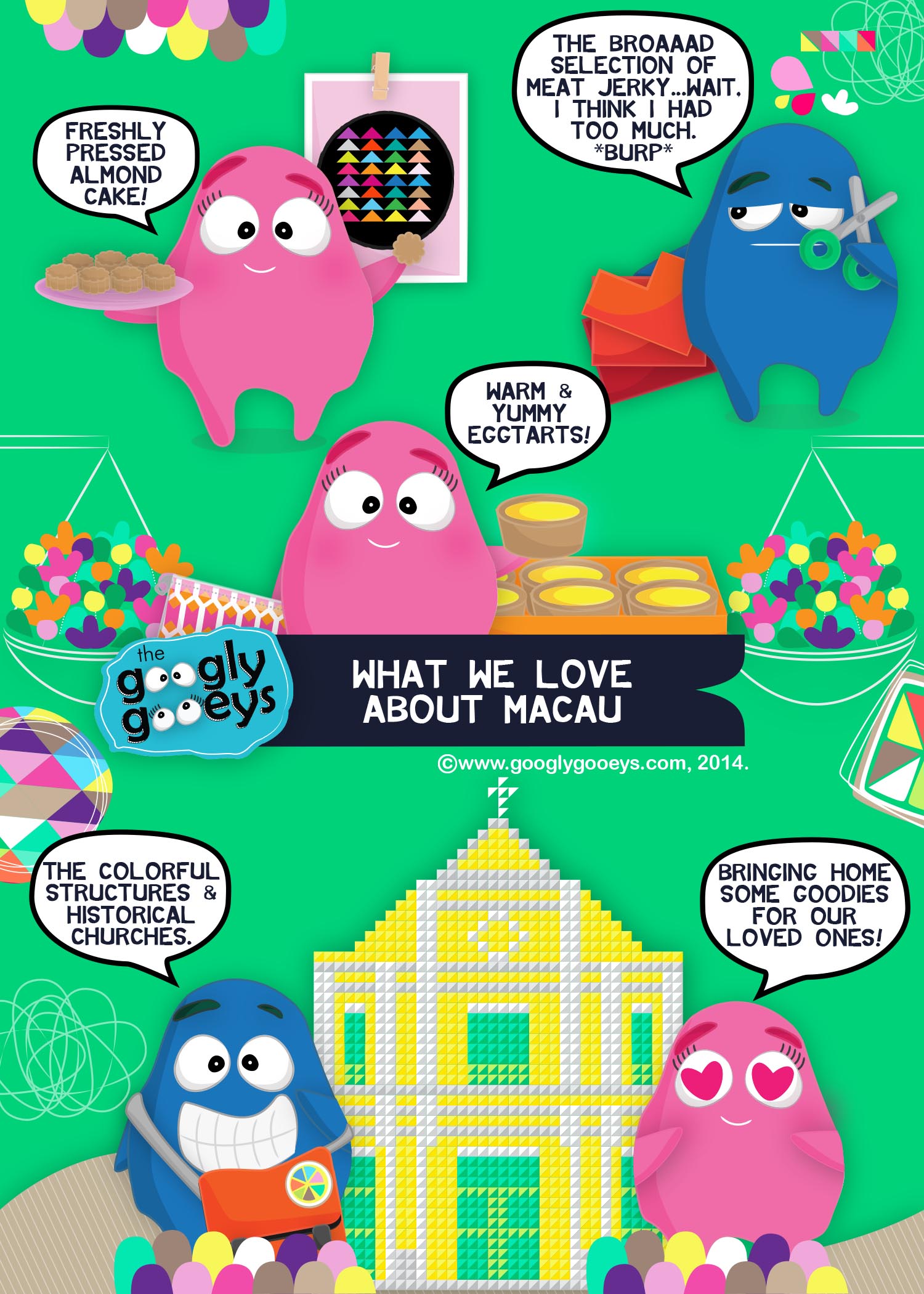 Last December, Ponggo & I went to Hong Kong but for the last leg of our trip, we revisited Macau.  Macau is just a boat ride away from Hong Kong.  So we figured, why not spend a day and have a food fest of sorts? 🙂 Sure, Macau is best-known for its Casino & extravagant hotels but one of our favorite spots in Macau is San Malo.  The walk starts from the Largo de Senado (Senate Square) where you will be greeted by pretty paved & tiled wavy floors and it ends at the Ruins of St. Paul’s Cathedral. Above is one of the buildings at the Largo de Senado.  I told Ponggo that we should wake up early so that we can catch this place empty.  You know what happened next, we overslept 😉

Macau has always been a Portugese colony until 1999 so it’s always interesting to see how the two cultures would blend as apparent in their street and road signs. One of my personal favorites is the facade of the St. Dominic Church as featured in the cartoon.  It has a certain shade of yellow that this photo cannot justify.  (…and I don’t know why WordPress loves changing the colors of our original photos…*getting a bit OC here*) 😛 Macau is also known for its freshly-pressed almond cakes.  You know where they’re selling almond cakes because you’ll be able to smell it from the streets.  Talking about almond cakes is seriously making me want to have a box of the local Philippine polvoron!! As I see it, it’s like if Uraro & Polvoron had kids, it would be almond cakes 😉 Above: No photo walk is complete without botanical elements, right? Hehe.

I just realized that our previous blog entries are also about travels.  It just reinforces the fact that we looooove travelling.  Sometimes, I’m being asked why we would spend a night in the mountains, bike for forty kilometers or even wake up at 5-ish in the morning to greet the sunrise.  We just do it for the sake of the experience and being able to shoot new subjects because we’re a couple of shutterbugs. Above: a note & a mailbox in front of one of the houses.

I honestly can’t read any of those characters but I always fall for these tiny details that give you an idea about the local life.  Years ago, I was also here but for a longer time so I ended up trying to get lost in the sidestreets while doing some interesting graffiti hunting. I also tried sitting in the same spot as I did years ago.  I was planning to draw the facade of the Ruins of St. Paul’s again. This time, I started with the most interesting figure, the skeleton.  I got my sketchbook & brush pen from my bag & started drawing this.  A bunch of fellow tourists around me got startled when I started drawing a skeleton.  They would look up when I do & they would look back at my pad when I did.  I think I freaked them out a bit so I stopped & strolled instead. Hehe.

I ended up looking for that other quiet spot.  *Oh, Tipsy, you’re such an introvert even without trying.* I drew what I thought from a far was a cartoony face of a dragon with a cute button nose.  Apparently, it was a design on a roof of a tiny temple with two birds on either side.  Can you see it? 🙂

I also love all those hanging pots with lots & lots of pretty flowers.  I wish I could just hang one outside our condo without having to worry about it falling to the floor (gathering a mean acceleration of 9.8m/s squared).  *Gahh…Why do I still remember these values? Remember how they would make you memorize stuff in school?  Apparently, you can’t un-memorize things as you wish!* Woop woop!  Here’s a photo of the whole facade of the St. Paul’s Ruins.  Here’s a tip: tourists will be crowding at the top of the stairs (at which point they will realize that the whole structure might not actually fit into their phones or digicams).  If you want more greens instead of stairs on your photo, go to the lower right of the garden instead of fighting for your own selfie space!  😉 *I swear, I ended up taking photos of people taking selfies with their own creative poses.  I was actually super tempted to post them here. Hihi*. Here’s a glimpse of Wynn at night.  The hotels are also tourist spots in themselves and a tour of these hotels will require n more blog posts.  Think of Macau as the Las Vegas of the East with its own quirks.  😉

Discover Macau for yourself today!  Book a flight with Air Asia Zest today!

And oh, oh, don’t forget to have a meat jerky & egg tarts while you’re in Macau! 🙂