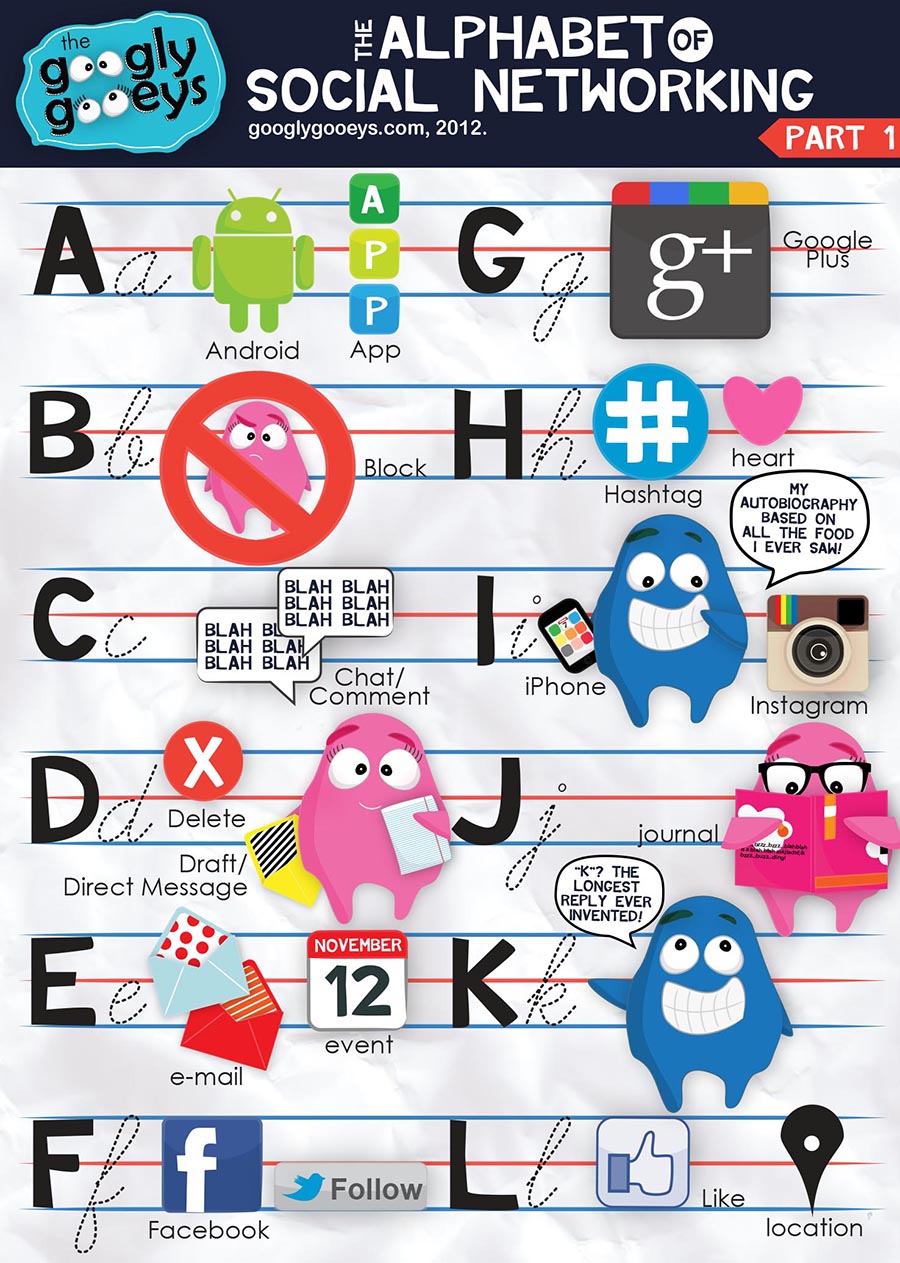 Here’s the social networking alphabet!  Well, originally, we wanted you to guess what each item was pertaining to then we realized that ten years from now (i.e. if we’re still alive), we still want to know what these symbols stand for just in case some of them are no longer recognizable. (You know, just case we have a case of mass amnesia).  We know the title is technically debatable (that is, if you’re the type who loves scrutinizing and giving your unsolicited opinions about practically anything everything)(Oops! Did we just scare away people who originally intended to comment on this post?)(Stop writing parenthetical phrases…..and sentences.)(Seriously!)(At this point, the grammar Nazi, with half-opened eyes sneers & jeers as the punctuation marks are allover the place!?!?!?!?!)

Anyhow / Be that as it may / Going back to the topic / Meanwhile (insert word that appears as a result of typing shift+F7), we initially wanted it to be the alphabet of the internet but that’s just to broad.  Yes, we know we’re somewhere between creative and pathetic on our answer for “K” (Ho ho ho!) and there are sooooo many other words that we could have included.

Anyhooz, we’re just happy that this turned out to be a real alphabet of social networking because the last time we attempted to do the alphabet of desserts, we just ended up having Sweet Things That Start With C.  It always amazes us how we still continue to churn out comics about social networking & internet cartoons.  Each time we feel like we’ve already exhausted the topic.

I’ve always wanted to add this section for over a month now but I was finally able to force myself to do this today! Ha! Anyway, I just wanted to include behind the scenes stuff, projects & experiments here. Well, here’s the first batch of “meanwhile” photos: basically what I did on the side to relax aside from chasing deadlines 😛 Upper Left: I finally have an iPhone case. I’m soooper late I know. 😛 I was pulling out stuff from my drawer since I was trying to do this mixed media project and was on some scanning mania.  I was tempted to my own little version of Things Organized Neatly.
Upper Right:  Excited to try out the Neon Watercolor paint tubes that were given to me by my cousin Justine which I spotted from one of my favorite bloggers PaperFashion.  I tried doing a dripping  version of my beloved iPhone case.
Lower Left:  Neon frenzy. Gifts from my dads (that’s my dad & father-in-law) and my cousin 🙂
Lower Right: I don’t think this necessarily qualifies as a “painting”. Hahahahaha. Anyway, I really love this super wide painting brush & I just love colors. I actually want this to be my next iphone case.  That is, if I’m not too lazy 😛

You can tell, I’m addicted to the 1977 Instagram filter.  By the way, to those who’ve been asking, I’m @googlygooeys on Instagram while Ponggo is @ponggo_googlygooeys. (I forced him to come up with his own account because he keeps on borrowing my phone. Hehe.)