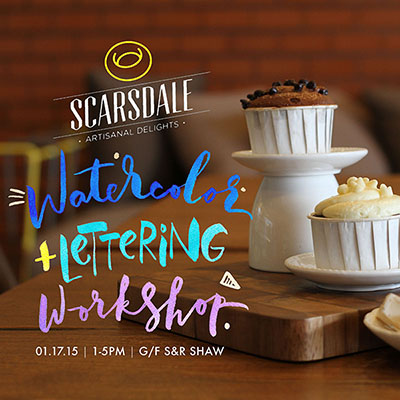 Prepare your eyes, crafty hands, tummies and phone cameras! We’re excited to announce that the next workshop venue is Scarsdale! Scarsdale Artisanal Delights is named from a town in one of the Northern suburbs of New York city.  From the same team that brought you Go Nuts Donuts, Scarsdale is a relaxing & quirky cafe at the ground floor of S&R Shaw Boulevard that offers hand crafted desserts that aims to capture the senses!
I wanted to do a tour of cafes and inspiring places for this blog and I always didn’t know how to get started and how to do it consistently.  So, I’m just happy that we have had our workshops at the Hey Kessy Studio, Mateo’s & Heima Store this year, Fully Booked Bonifacio Global City next year and now Scarsdale.
Before I left last October, we were already eyeing the second floor for you guys.  It’s the one with the bright colored neon bar chairs! <3 There’s also a generous amount of light coming from the huge window and I’m such a fan of places like these!  Now, this is tempting me to move our sofa to another side of the house so I can have our window all to myself when taking photos at home.
You just have to admit it’s more fun to work with color when you can see it in its most natural state!  This is also the reason why I have this funny habit of turning on my phone flashlight when I desperately want to see the color of an object and I have no choice but to work with yellow light at night. Aside from the yummy croughnuts and doughnuts, Scarsdale an Instagrammable place where the food is as good as it looks! 😉  The ones in the picture are their cupcakes.   We’ve already planned the menu for you guys and you’ll definitely have a good sample of their sliders, desserts and drinks! Before my Instagram days, I really thought my love for daylight was odd.  I thought everyone needed to shoot with these awesome light set-ups to be called a legitimate photographer.  Then, I came across Irving Penn who loved shooting his subjects under natural light to the point that he would build portable tents in the middle of nowhere!  Whoa. Now, that’s living the dream! So, are you ready to eat?  I mean, paint and do some lettering?  Our food was gone seconds after this shoot.  Although, if you’ve been following the blog for a while, it may not come as a surprise to you as you very well know that I have a low EQ. Whites & brights!  Well, that’s what I always tell myself when trying to curate my posts on Instagram (although I always end up with a hodgepodge of unrelated posts anyway).  I really hope I can have a studio someday where I can scatter all my art materials on a half-white, half-chalkboard black table and I’ll definitely want my chairs to be a bright shade of yellowwww! The diagram of the doughnut above honestly reminds me of this math equation.  It’s one of the topics from my Calculus class.  One day, while studying for exams together with my friends, I just started crying as if I was broken-hearted just because I got my doughnut equation wrong all the time!  *Yeah. Apparently, it’s possible to have feelings for cold hard numbers.*  Now I always end up beaming when I see this illustration and how this brings back fun & funny memories. So, that’s it!  So sorry for holding you guys back from signing up but see you on the 17th of January 2015!  See you next year!  *This is usually the time of the year I enjoy saying next year when really, it’s just a month away.* Ho, ho, ho. 🙂

Update as of December 16, 2014:
Hello Guys! Thank you so much for signing up.  We’re so overwhelmed with the response to the workshops.  Trust that we’re working on new workshops schedules.  Those who have signed up until lunch time today have already been e-mailed about the waitlist.  To those who haven’t signed up, you may still fill up the form below.  Let’s keep in touch & see you soon! 🙂

Update as of December 18, 11:46am:
We have two new workshop schedules to accommodate everyone on the waitlist: