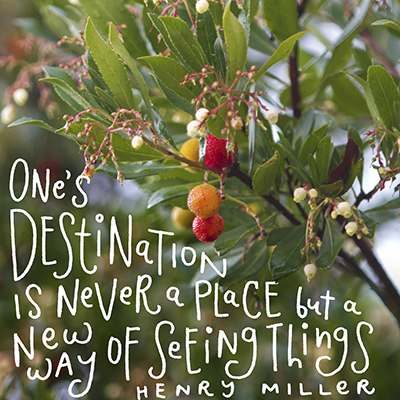 Hello from the picturesque Tuscan Region that’s why I’m calling this entry Postcards from Tuscany.  This is my favorite part of my Big Blog Exchange trip! Above: The typography was done by Ella Lama.

When I was in Naples, I sent Ella a bunch of photos with negative space in it.   I’m just happy that this mini collaboration has shed some new light to my photos.  This quote that she chose in particular feels very comforting.  I was initially thinking of coming up with a touristy post where I make sure I’m able to cover all the landmarks. But, as you will discover later, this post is full of photos of…umm…plants. Hahahaha.

When I initially applied for the Big Blog X, we were all asked to submit a simple write-up.  I mentioned there how much I loved taking photos of structures from different angles down to how the details of plants & leaves.  I know it might have sounded like a sheer play with words but I wasn’t kidding & you’re about to find out why. Above: For example, I just can’t let this moment pass. *Yes.  Apparently, even plants have their moments.*  It was a rainy day and when I took this shot, I was hiding my camera under my umbrella.  No, I wasn’t worried about my leather bag, my jacket or my hair getting soaked.  Haha.  I was just fascinated to have caught the droplets of water before they fell from the ends of the leaves.   Talk about priorities. Above: The vantage point from San Gigmignano.  Every time I see this photo, I imagine a fairy tale or I end up daydreaming about getting to spend three whole days in this region someday.  I want to be able to wake up with this as my 360 view! ❤ And, if time permits, be able to paint the scene.  But now, I’m stuck with painting from my laptop. Ho ho ho.

The Tuscan region has been on my bucket list for 5 years now.  The first time I passed through this place, I was on a tour bus making its way to Pisa.  I ended up having blurry photos but the image was in my mind for a long time!  I didn’t know if I will ever be back in the future but I always prayed that I would catch it during spring so that all the leaves would be green.  I really thought that by fall, all I would see are shades of brown and yellow.  Then again, I was eventually told that there are evergreen trees! *Doingk* Above: The night I arrived at my hostel, I was walking on this path with my luggage.  It was dark.  I read online that the place I’ll be staying at has a huge garden but I pretty much underestimated the word “huge”.  It was a 300 meter mostly uphill walk.  I know I should have brought a smaller luggage but since we’re going to Iceland, I had to protect myself from the cold just to be sure.

When I woke up in the morning, I discovered that this is how it looked like, I got a bit teary-eyed, I was truly in the place where I’ve always wanted to be.  The path was beautiful. Yes, it was also raining but I just had to stop for a photo.  When I was growing up, I always thought nature was incapable of producing saturated hues but here I was staring at the tree covered in chartreuse leaves. Above: That’s my hostel.  It used to be a villa.  To give you an idea, it has this rest-house-in-Tagaytay feel except that it’s in Florence. 🙂

Below: The window to the left is my room.  It’s not your typical hostel, don’t you think? 🙂 Below: May I also share with you that there was this citrus plant just by the hallway that leads to my room? 🙂 So, that day, we were set to visit this place called Monteriggioni.  It is a Medieval walled town in the province of Siena and everywhere I looked, it was like a place from a story book. Below: Olive trees upclose!  My cousin  Jane  & I were talking at the family Christmas party yesterday and she mentioned that most of my photos are walls of houses and plants.  Well, true enough, they are!  I don’t know why I end up grativating to these subjects. I used to have this phase in photography where I would be sad if the skies weren’t blue and the grass wasn’t green. *Shallow, I know.*  I would instantly lose my appetite for taking photos at the sight of gray skies.  But I guess travelling alone makes you accept the things that are being thrown your way.  It makes you realize that you’re just a tiny speck, you have to adapt to your environment and you eventually surrender.  It was still threatening to rain but there was just an enough amount of clouds and light that brought out the colors in the subjects.  I also learned that just like in the picture below, the mist makes your background a bit dreamier and exposes your subject more.  *Either that, or I’m just making tons of excuses in my mind. Haha.*

They say the Cypress trees have long been present in the paintings of the masters such as Leonardo da Vinci and I can see why. 🙂 I also found a pottery store in Monteriggioni.  I ended up indluging myself in the patterns & colors that they have & bought a couple of tea cups & an egg holder.  I know it’s hard to bring home breakable stuff but if you really want something, you will always find a way. 😉 Below: In this day & age where everything is styled and made to look Pinterest-y, I looked at this with green shutters and I was a bit cynical.  I initially thought they placed the wheelbarrow by the door to make the place look cuter.  But, nope.  After I took this photo, a man went out, got some firewood & went about with his work.  “So, it’s functional”, I silently concluded in my head.  I guess spending hours and hours on Instagram makes you a bit jaded as to whether or not things have been neatly arranged to sell a certain type of lifestyle. We left Monteriggioni and my body was having a dilemma.  Everywhere I looked I would see a view similar to this but the weather was making me sleep.  I instantly concluded that if I actually lived here, I would probably stop ageing.  My senses will definitely get its much-needed rest and my ears will be free from noise pollution to boot. At this point, I’m actually Googling if there’s such a term for addiction to plants.  I know you’re probably going “What!?!?! Another plant?!?”.  But, if you’re still with me, feel free to use one of the photos as references for your illustration work. I took these photos for the same purpose.   I also love how the leaves above resemble our mango leaves but the fruits are a shade of purple and, and, and….they’re playing with my camera lens! ❤

I know I’ve bombarded you with plants but I would see artworks made by artists abroad and I would always wondered how much of the stuff they draw is derived from reality and how much of it is from their imagination.  And, when I spot a plant or a fruit that resembles a shape I saw only on a pattern before, it just amuses me. Above: While there are evergreen trees  and trees that turn into yellow or brown during this time of the year, there’s the maple tree whose leaves turn red.  I always thought I would be producing the dreariest photos during the fall and I didn’t understand why everyone on Instagram was gushing about this season.  Scrolling down this blog post, now I understand why and I believe I’ve just completed my rainbow palette.  🙂

We arrived in Siena and it was raining really hard.  My umbrella couldn’t even withstand the wind.  There was even a moment begging to be drawn which I now see in my mind  when the whole group was bowing down to the gust of wind for a couple of seconds and all the umbrellas went the other direction.  You can say it wasn’t the best day for sightseeing but from someone getting lost pretty much every day and being alone, I was just happy to be in the company of others and since there’s not much I can do about the weather, I saw it as a reason to bring Ponggo to this place someday.

Below: I’m feeling a crack in my heart and I’m partly cringing while uploading this photo.  You can still see hints of water droplets and the sight of my umbrella in this picture below.  *Yes, I feel too much.* This doesn’t do the Cathedral of Siena any justice.   I suggest you visit Google Images, you’ll know what I mean. 😉 The cathedral was also as pretty as it was on the outside.  This is rare because usually, these places look a bit darker and less detailed on the inside. Good thing it was high time for lunch.  I sat down with some newfound friends from Carribean and New York and here I was, the supposed introvert now making friends with fellow travelers. 🙂 I also met a very kind couple from Malaysia and I was amused at how some of our words are similar and how they knew about our local actors thanks to our telenovelas. 🙂 We left the city center of Siena and it rained again.  We all got drenched at our shoes and outfits got soaked.  At this point in the trip, we were asked by our tour guide if we still wanted to proceed or not.  A majority wanted to go back to the hotel.  Well, the rest of us weren’t really allowed to go home and I’m so happy I didn’t want to because I was just about to miss my potential Facebook cover photo. Hahaha.

Just in case you’re curious, the filename for the photo above is also “Ahhhhh!”

It’s not just the view that amazes me.  That night, we had our wine tasting and we also enjoyed crackers and salad with olive oil and truffle oil.  Ponggo is so envious he didn’t get to join me during this part of the trip!

Hmm..That’s pretty much it for this day and admittedly, it was pretty hard to finish this blog post because every time I would upload a new photo, I’d look back on all the other photos and wonder how a place could be this beautiful.  And, as I’ve mentioned in my posts about Burano and Venice, each Italian city is so unique that if I actually didn’t tell you where I was going, you’d think I’ve been to different countries already.  I always thought that there should be a big body of water that should separate two places to make its culture and lifestyle different in the same manner that the Philippines has a lot of local dialect because it is an archipelago of 7,107 islands but every single day, Italy proves me wrong. 🙂

P.S.
1/ If you’d like to join the Big Blog Exchange next year, click here and look for the “Notify me next year” box & type your e-mail address.

2/ Check out our hostel-turned-villa and other hostels at the Hosteling International website.

3/ To accommodate everyone in the waitlist, we just opened a new workshop slot at the Hey Kessy studio on February 7, Saturday from 1-5pm.  As of this moment, we have one slot left.  You may sign up here to be the first one to get notified just in case a slot for the other schedules gets freed up or when we have new workshop schedules.  By doing so, we will be able to contact you via SMS and/or e-mail. 🙂