Nuffnang Blogopolis: Onstage & Behind The Scenes 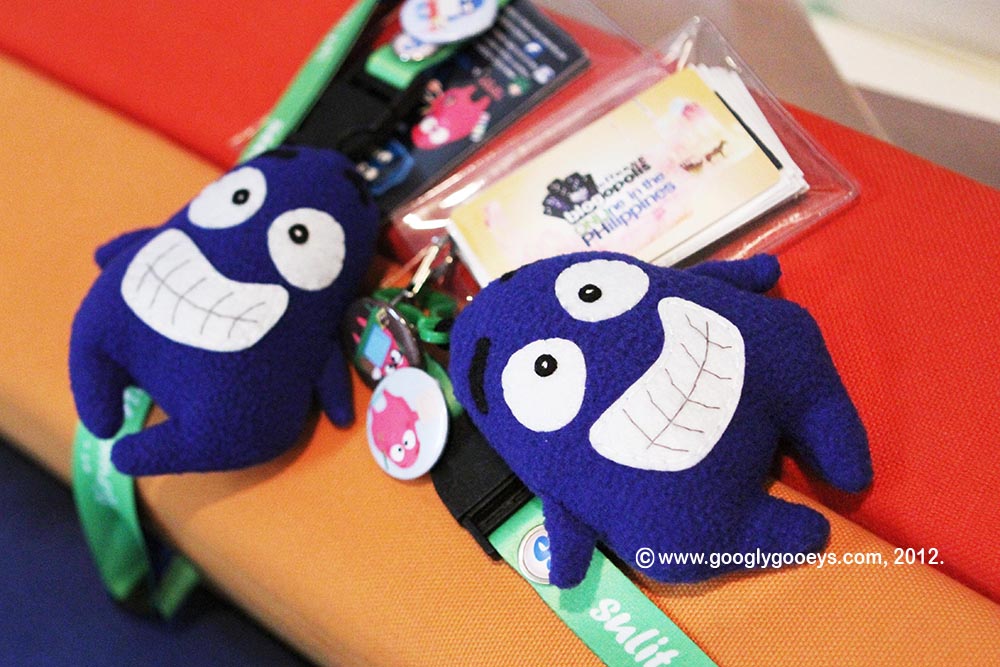 Warning: This post has too many parenthetical phrases and asterisktical side comments. (That is, if the word “asterisktical” actually officially exists ;)) May I also warn you about the run-on sentences?

There was a time when our readers on Tumblr would send us messages wondering how we looked like, and we would send them this photo of us holding up our 3-feet tall Tipsy & Ponggo standees without our faces as a practical joke.   We were so successful at not spilling anything about our identities to the point that we eventually discovered, some of our friends & relatives knew about the characters but had no clue about the blog owners. Ha! Above: Our Sulit.com.ph lanyards and Blogopolis RFID’s. Ponggo wanted me to wear Tipsy but yes, I have to admit, Ponggo’s my favorite character too.  That’s why he appears in most of the comics 😉 Poor pink goo detests herself even in her make-believe cartoon life! 😛

Our path towards becoming full-fledged blogging ninjas started to change when we got a call from ANC Shoptalk.   Initially, I thought, someone somewhere got hold of my resume and is offering me some corporate position and that I was up for a job interview.  The caller then proceeded to ask us if we were willing to participate in a live talk show…on TV.  I didn’t know what to say, so I gave the most sensible answer *sarcastic*, “Oh wait! We’re supposed to be anonymous. Ah, wait, let me call my (then) boyfriend (now hubby) and I shall get back to you!”

Rizal Ballroom C with foam board buildings 🙂 I actually wanted my picture to be taken with those standees but I eventually forgot about it! (I’m such a sucker for props online and in real life) 😀

Fast-forward to 2012, the lines between our offline and online lives have continued to blur. As a line from the I Love Charts book puts it,

“What may be new is the increasing number of people, myself included, who see no difference between online and offline life.  There is no point at which one ends and the other begins.”

A big chunk of this blurring process just happened last Sunday at the Nuffnang Blogopolis held at the Makati Shangri-la.  That’s why we were so nervous, anxious, and clueless about what to expect when facing an audience of netizens offline! Above: Panel with Bloggers: Abe Olandres of Yugatech, Tipsy, Ponggo, Mike Lim of Fashion Pulis cracks up the audience with his crazy and brutally honest answers, Noemi Dado of Blogwatch.TV and AboutMyRecovery.com, Ivan Henares, Carlo Ople of TV5 & the New Media, Christine Dychiao of Manila Fashion Observer & fashion blogger David Guison.  Thanks to Bambi Young for this photo! 🙂

If you’ve been reading the blog for a while now, you’ll instantly get why Tipsy & Ponggo are pear-shaped: the figures are supposed to doubly represent Tipsy’s bottom-heaviness & Ponggo’s umm…huggable tummy. 😉 (Ahhh..*breathes* Glad to get that fact out of the way!)

More after the jump! One of the main speakers, Maria Ressa talks about the evolution of journalism from its early offline days with the pen, paper & a payphone and how social media is now the new media.   Within a few seconds into her speech, you could see people adjusting their seats.  She has that commanding presence and everyone was ready to listen!  At this point I wanted to faint.  With the bar set that high, how will I be able to capture our audience later in our breakout session? *Oh, I’m such a worrywart!*  I kept on live tweeting during Maria Ressa’s segment.  There were just so many quotable quotes and insightful graphs about how social networking data, if used properly, can perhaps predict the outcome of an election based on the keywords being thrown online.  How cool is that? After the panel with the bloggers, *Oh, I’m such a good story teller for messing up the sequence of the events in this post*, we had lunch and if you’ve been reading this blog for a while now, you know how much I love chocolates.  I instantly turned lunch into my own mini dessert buffet then I stopped because I got paranoid.  What if I ended up burping in the middle of my presentation?  Oh, the horror! Haha.

My phone actually looked like this.  I had all of our slides so that we can use it as cue cards.  (Yes kids, back in the day when there was no iPhone, some people actually used cards for their keywords when presenting!)

As we’ve said, we wanted to present as the Googly Gooeys so our slides were pure Googly graphics plus a video (err..silent movie?) we did in collaboration with animator Mikey Melendres back in ’09 when we were still experimenting with all sorts of characters & story lines.

Above: After our talk, we were joined by Mylene Chung & Dwight Co of Pepper.ph.  Is it just me or were all the panel sessions in this had their own hilarious moments? 🙂 Thanks to Joey Abiog of DaddyJoey.com for this photo. You can check out his entire Blogopolis photo stream here 🙂 Met some old & new faces: Bambi Young of Happy Bambina, Ava Vicencio whom I was tablemates with at a watercolor workshop before & Alvin Gale Tan. While I was going through all the photos, I’m actually amused how the mic in front of them is blurred.   I just realized that when asking questions to the panelists, it kind of feels like you’re auditioning too for a American Idol or something 😉 Ha!

Breakout Session A is done! Woohoo! 🙂

L-R: Allan Barredo of Lantaw, Richard Co of Tales from the Tummy & Helga the Weber of Ditz-Revolution.net, Noelle de Guzman of KikayRunner.com & NoelleDeGuzman.net 🙂 Above (Left): Ponggo copying Allan’s priceless expression during the panel as he reacts to Helga (Right).

Above: These were the RFID’s responsible for the Autotweets.  We were tap, tap tapping the day away because we were all so excited to win iPad mini’s, iPhones and other exciting prizes. I’m actually amazed how quickly the ladies can instantly pose.  One minute they’re all laughing and doing their various hand gestures while telling stories.  However, as soon as they spot your lens from their peripheral view, they instantly stop and smile.  Hahaha. This was during the early minutes of the Networking night when people can still afford to take pictures and talk to each other.  During the last hour, none of us actually wanted to go to the bathroom just in case our names were called because Nuffnang X was gave away a couple of iPad Mini’s and Sulit.com.ph gave away an iPhone!  The crowd actually cheerily counted down from 10 to 1 as if it were New Year’s Eve.   People were just so excited for some missing person not to win.  Haha.  That’s the spirit! This event wouldn’t have been possible without the hardworking Nuffies who sacrificed sleep and all and shuttled the tons of goodies for the bloggers who attended that day! Here the girls of Nuffnang Philippines! Speaking of goodies, don’t get me started on the giveaways the bloggers took home that day!   Here’s just a zoomed in view of the Nuffnang  Oishi bag.  We have a good supply of Oishi O Wow! packs at home.   It doesn’t say what you’re going to get so you really have to open the pack! (Hmm…It’s sort of like life: You just have to dive in because no one will give you clues about the future. Wait, why am I philosophizing over a pack of snacks? Haha).  The Unilever, Fresh Bar, Marks & Spencer and SkinWhite gift packs shall spare us too from weeks and weeks of going to the grocery too so T-H-A-N-K-(space)-Y-O-U-(exclamation point).  Hehe.  Lastly, super thanks to Sun Broadband for our prepaid stick to help us blog while we’re on the go! 😀