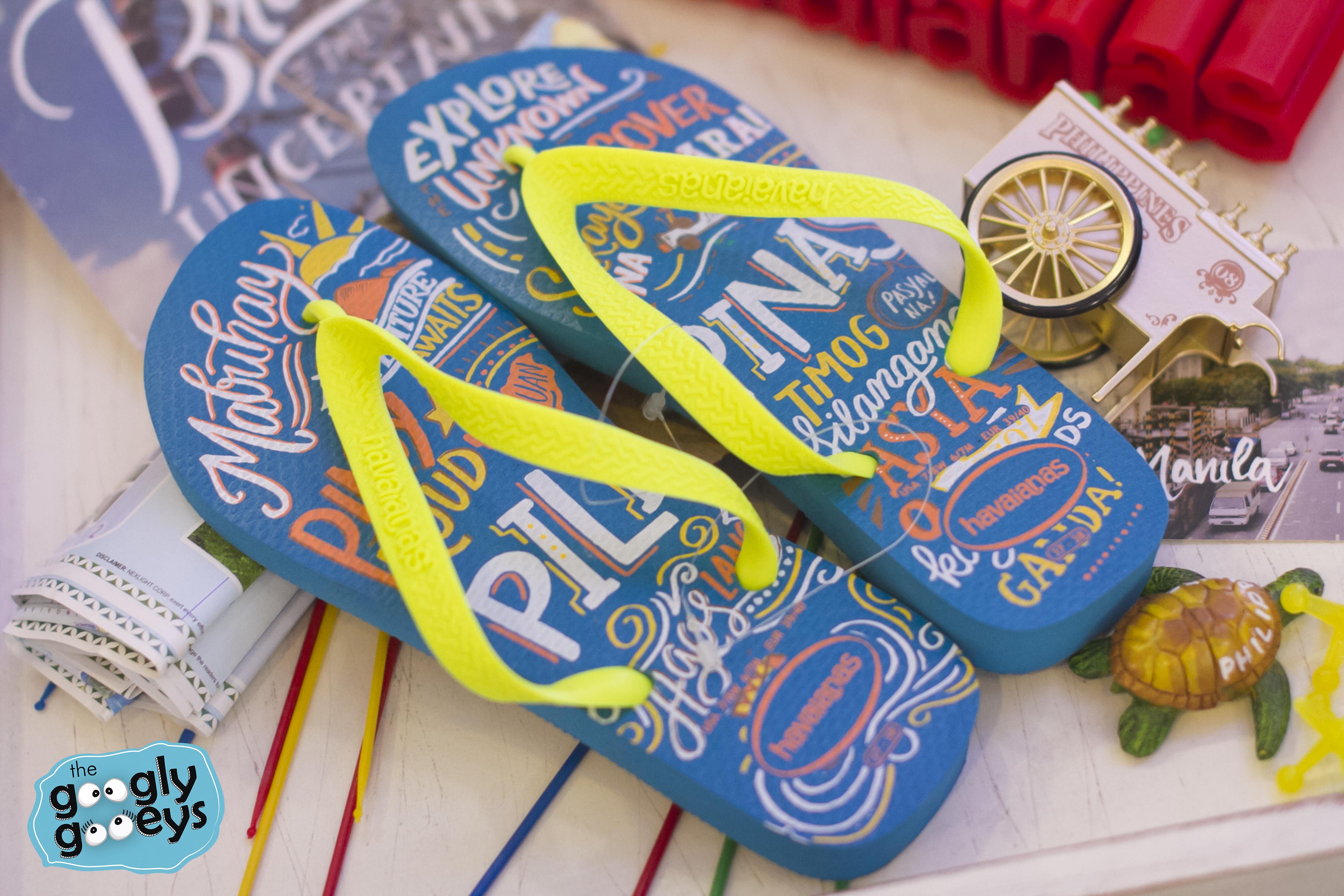 I’ve been wanting to blog about the Havianas Filipinas Launch for a week now but so many things just got in the way plus the challenge of carrying a 9-month belly has been sending me to dreamland or waking me up in the middle of the night more than I want to lately! *Yikes*

The reason why I’ve been itching to blog about this is that there’s so much eye candy at the Havaianas Filipinas Launch last week at Whitespace.  To boot, Havianas tapped three of our local artists and letterers: Abbey Sy, Patrick Cabral & Alessa Lanot.  🙂 Above: a Havaianas Filipinas pair designed by Abbey Sy. This year’s theme was Laro, Lasap, Lakbay (literally: Play, Eat, Travel) and the whole venue was filled with tents, picnic tables and Filipino street food.  You can already guess I had so much fun eating. *Oops!* I try tell myself eating for two when you’re pregnant is not real since you only need 300 calories but gahhhh, my digestive system always screams I NEED FOOD NOW!  So you know what happened. How cute it this tiny gilded Sorbetes cart, huh? 🙂 ♥ A to Z by Alessa Lanot of Life After Breakfast Above: Abbey Sy, Patrick Cabral & Alessa Lanot.  Got to catch these three just right before their demo.  Whew! Okay, wait.  Actually, before we entered the event, Mansy & I dragged Abbey against this background and decided to take photos of her here as if it was her graduation. Haha.  Well, we had those flowers as a backdrop and it we were approaching the golden hour so we can’t just let the opportunity pass.  #BloggingDuties Alessa was assigned to design her concept of “Lasap” which is just apt because she also owns and manages multiple resto’s in the Metro our favorite being Hillside. (Hallo Banana Smoothie & Bangus!) Each picnic table had art materials and brush pens so that the crowd can get their creative juices flowing. I’m so happy to see so many familiar faces from this event one of which was Justin Quirino (left) whom we met at the Blogopolis earlier this year and the year before that. 🙂 True to the theme, there were multiple stations that represented each aspect: a tumbang preso, doodling station for the Laro portion, a vintage van for the Lakbay station then fish balls, squid balls, dirty ice cream, taho, pandan juice, sago’t gulaman and quesong puti for the lasap station!  *Wow!  I’m finishing this post at an unholy hour and it’s making me want fish balls. Oh noes.* Here’s an upclose shot of Patrick Cabral’s design.  Oh, by the way, you have to catch this guy’s talk at the Graphika Manila 2016! Above: Lettering by Alessa Lanot Those who went to the event brought home a pair of slippers. I already started wearing mine early this week but I’m really hoping to be able to take it to the beach next year when little Riley’s big enough to travel. 🙂 Above: Dip pen doodles by Alessa Lanot from the demo. Above: Cat Juan-Ledesma, Nicole Hernandez-de los Angeles and Patty Laurel-Filart.  Moms and life pegs starting next year. Hahaha. I don’t know how they magically went back into their pre-pregnancy bodies. 🙂 Above: Happy to see these guys again:  Fashion bloggers Sarah Tirona of Fashion Eggplant, Ana Gonzales, Ava Te-Zabat of Artsy Fartsy Ava & Paul Chuapoco of Paul the PR Guy 🙂 I’m always amused that I get to see Ava at Arts and Crafts events! Above: Brush Lettering by Ava

If you want to know what goes on behind blogging and trying to capture the spirit and details of an event, this was me requesting June to hold her stick of fishball for me.  Haha.  People are wondering what I’m doing with a big belly and a camera.  Well, I know my life will be different next year and I know who my new subject will be but for now, I want to be able to make the most out of the last few weeks before I give birth and hopefully freeze all these moments with friends in photos. 🙂 Clockwise: (1) June Digan, Camy Francisco-Cabral & Kanel Adriano, (2) Kanel, June & I with Tweetie de Leon. (The only time thing that would make my friends and I quit playing patintero or piko when I was a kid was the opening tune of Okay Ka Fairy Ko! where Tweetie was an actress so I insisted that this photo be taken. Haha. Thanks for the photo Carl!) ,  (3) Yours Truly with Abbey & Mansy: The La Union Roadtrip Group (4) Craft Camp Group sans Nica: Mansy Abesamis, Alessa Lanot, Macy Alcaraz & Mikko Sumulong

Here’s one of the event invites designed by Patrick Cabral.  The concept is genius since it also doubles as a coloring sheet. I was just so so happy to have finally met Patty Laurel’s baby Theo!  Check out the #EverydayWithTheo hashtag on Patty’s Instagram if you want to know what I mean.  This is my fave post to date.  That’s how I look like when I’m tired and I feel like my world is falling apart but I try to stay strong. Haha. This baby is just effortlessly adorable.  That’s him sporting his signature pensive look. Layout game strong!  *Insert flexing emoji here*  Above are Patrick & Abbey’s works.  They make me feel like I haven’t done much thought about my lay-outs when I see them work. Haha. Final group picture with Macy, Mikko, Kanel, Carl (Were the indoor lights too bright for ya?), Mansy & June.  This is us before we left for a dinner which turned out to be an ab workout / laughing / hyper-ventilating marathon.  Haha.

‘Til the next fun & colorful event. 🙂

P.S. Get your pair of Havaianas Filipinas edition from the nearest All Flip Flops branch! 🙂