Five Stages of a Busy Schedule + The Kris TV Interview 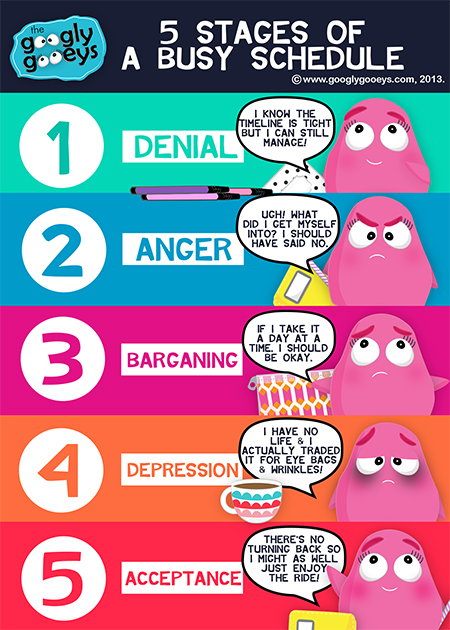 We’ve had a crazy past two weeks and we just realized it when we got home the other night & stared at our messier-than-usual place.  Apparently, we have been treating our tiny home like a hotel.  We only get to stay here to sleep then we would pack up a third of our house and leave the next day.  Please don’t get us wrong, these were also the past weeks that we’re most grateful for.  Quoting Leah Dent & Angela Mitchell from Frankie Magazine,

“It’s probably what drives us crazy sometimes but it’s what we love the most as well.”

The other night, I ended up sleeping from 1-10am then 3-6pm.  Wow!  I usually only get 5-6 hours of sleep and somehow, my body has forced me to rest.  I also got a good eight hour sleep last night save for my nagging back pain / pinched nerve or whatever it is that doesn’t have a sign of leaving that has been responsible for the funny faces & grunts that I make for the past 36 hours.   Anyway, here’s the five stages of a busy schedule.  As you can see, it’s like the five stages of grief because we’re mourning for the life we had & (temporarily) lost.

Speaking of busy schedules, one of the busiest people in the Philippines aside from the president is none other than her sister, Kris Aquino who runs a daily talk show and has multiple endorsements to boot!  Last weekend, when we got home, we were surprised to get an e-mail from Kris TV inviting us for an interview.  At that point, none of us believed what was happening because it’s just too good to be true.  We felt like we just received an invitation from the queen or Oprah–which is probably apt in a way because she is after the queen of all media, talk shows & game shows! Joining her in this episode was Kim Chiu, who rose to stardom since winning Pinoy Big Brother back in 2006.  Last Tuesday, we were given a glimpse of the inner workings of a talk show slash taping a bazaar set-up together with 30 other sellers.  The Kris TV staff are very alert, hardworking, passionate & committed about what they do. They were very efficient too–talk about 5 hours of taping with Kris & Kim rarely taking a break (by break, we mean 1-2 minutes of drinking water or having hair & makeup retouched while standing up while mentaly preparing to interview the next shop)! The whole concept of this particular episode is to gather together Instagram sellers.  There are so many IG sellers these days–some even with more followers than local celebrities.  Kris definitely knows how to make her interviewees at ease and she isn’t even holding any script!  Well, we hope we did this Kris TV interview some justice.  Our interview will be aired anytime from Monday-Wednesday this coming week (September 30-October 2, 2013) 😉

Thank you again Ms. Kris Aquino & Kim Chiu for having us on Kris TV and inspiring us.  Thanks as well to Dianne, Gian & Joy of Kris TV for all the help! 🙂 Check out the rest of the Instagram sellers on the Kris TV Official Instagram and Twitter pages.