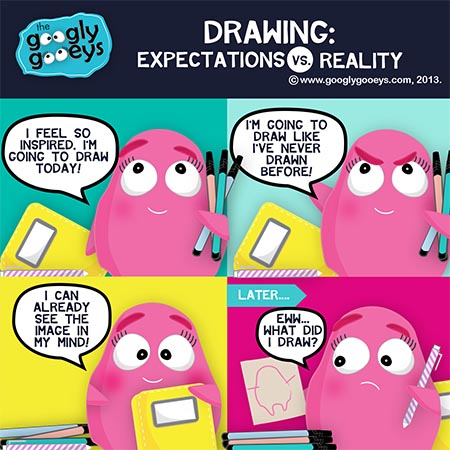 This is how I feel every time I draw and my mind won’t cooperate with my hand.  Same goes for taking photos when I already have a composed image but I just can’t seem to let my camera to follow my brain!  On the other hand, a day is awesome when the stuff that I’ve created is better than the picture in my head.

However, yesterday wasn’t one of those days.  I felt like I was in some math class where all my classmates seem to have an easy time computing the equations inside their head while I’m struggling my lengthy solutions.  So there I was inside one of the rooms in UP CFA surrounded by these awesome members of Ilustrador ng Kabataan (INK) [translation:  “Children’s Book Illustrators”].  While everyone was chilling out and warming up for the portrait session, I felt like I was about to take an exam.  I brought my camera because I knew I would be seeing (take note: not making but seeing) some cool stuff that day.  The portrait session was in a speed dating format where everyone was given 5-10 minutes to do a portrait of each other.  As soon as the time is up, everyone was expected to move one seat to the right and start drawing their new subject.

Above: A quick sketch by Natasha Ringor with brush pen & copic markers

If you’ve been following me on Instagram, you know what I can offer.  Aside from the Googly Gooeys, I can only draw these dudes or some variations of them.  While everyone was seemingly fixated on perfecting their portrait’s faces, I was already busy with completing the details  of their outfit, the print on their shirt…et cetera because I had such a crude drawing. As I mentioned, I was able to bring my camera but I didn’t know how I will document the whole thing because I was also one of the participants (although I actually really wanted to hide & run away just seeing everyone’s detailed outputs).  Luckily, someone came in late and since we were an even bunch, they needed someone to give up his/her seat.  I volunteered! *Ahahaha.* Above: Maud Villanueva’s portrait of Angela Taguiang with a freshly drawn portrait from Iori Espiritu

Sometimes, I actually forget to click to take a picture and I end up watching through my lens because I was simply in awe!  I discovered a lot of art instruments that I never knew existed.  I also saw different ways of using art tools (and thinking how much fun I was missing out on for taking a business course back in college–still totally not an excuse for coming up with simple doodles)! While I was going around & taking pictures, a lot of artists were asking me if I was okay about giving up my seat and they actually felt sorry for me.  Well, what they didn’t know was that I would have felt sorry for them if they saw the subpar portraits I was handing out to people prior to playing photographer! 😉 They told me that it was going to be a 5-minute thing so I thought everyone would only be able to draw outlines of each other but no-ho-ho-ho.  As it turns out, most of the people there had superpowers. *Facepalm* So, while everyone was really quiet and concentrating on their subject and budgeting their time, Jason was busy making everyone laugh–telling jokes now and then while effortlessly churning out realistic portraits. *Gahhh* All in all, it was a fun portrait (observation) session!  I wish there will be more of these kinds of meet ups soon!