9 Books for Kids & Kids at Heart from the MIBF 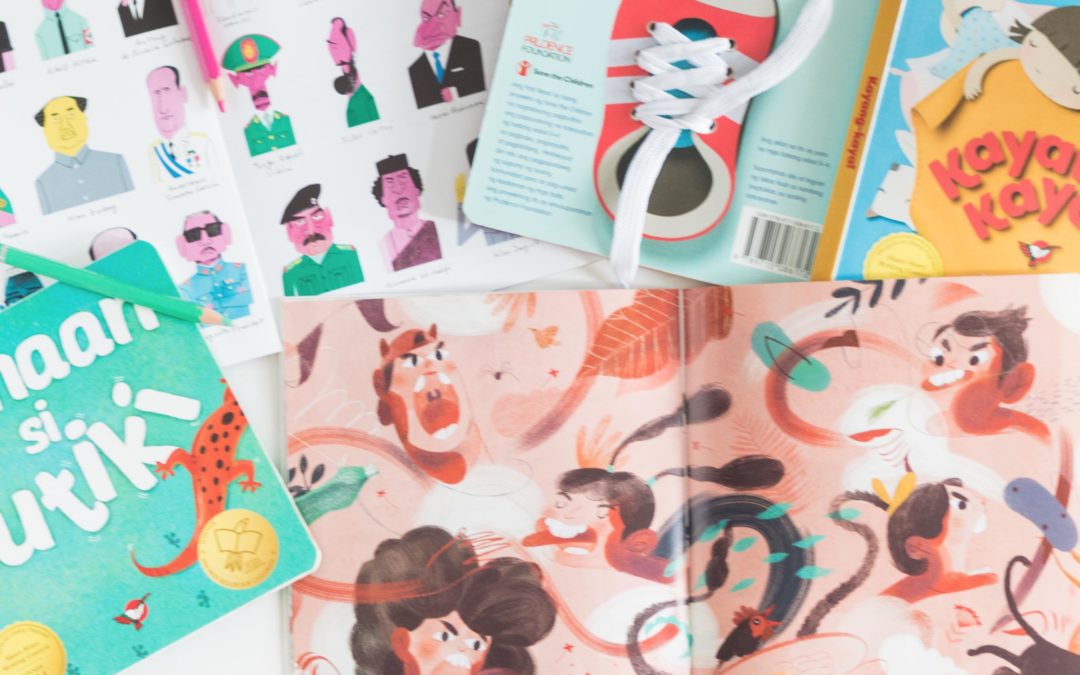 I wasn’t really planning to create a post about Manila International Book Fair (MIBF).  To boot, I didn’t bring my camera as I usually would. I didn’t have planned shots in my mind. I didn’t brief my family that I will be covering the event. *Woops. Now you know what goes behind every blog post.* Haha. 😀  I’ve been wanting to go since it opened but I always feared that I might end up buying lots of design books.  It was the first time in such a long time that I was pretty scared of myself.  Last minute, I asked the hubby if we could go. Hahahahaha. I was just so curious.  I also realized I haven’t regretted going to any event lately.

When they announced that the MIBF was going to be bigger this year with an entire second floor dedicated to children’s books. I got excited! 😀
I’ve been wanting to buy Riley bilingual and books in Filipino–the mostly board books since he’s only 20 1/2 months old. 😀  Well, if you’re not a parent, these children’s books are actually look into some of these books.  We do have a lot of talented illustrators in the country.  Most of the books I bought were illustrated by fellow artists from Ilustrador ng Kabataan.   I am blogging about this because I’m their internal fan girl. Haha.

The next time you ever visit a bookstore, I suggest you go to the local children’s books section.  The illustrations will blow your mind. 😉  So next time you’re reading a book to your son / daughter / niece / nephew / grandchild / random stranger, check out these titles and get inspired by the illustrations while treating someone to storytelling session. 😀 (And oh, thanks to Anne for suggesting that I do a haul post.  I may not have the courage to go in front of a camera yet and talk to you about these but meanwhile, enjoy!) 😀 3.  Kara at Play
Words by: Lara Saguisag
Illustrated by: Jamie Bauza
Published by: Adarna House
As soon as I opened the book I saw words like dancing, jumping, handstanding.  It was about an active little girl named Kara. I just realized how much Riley can relate to this. He loves to move all the time!  The book is also about the process of falling down, getting hurt & getting back up again.  And as you might have guessed, this is a recurring life theme. 😉 4. Kapitbahay Kubo
Papercut Illustrations by: Pergylene Acuña
Published by: Adarna House
I’ve been singing Bahay Kubo to Riley when trying to put him to sleep at night.  This was my favorite song in Grade 2.  We would even sing it with a second voice in music club. Haha.  Seriously though, I hope he gets to acquaint himself with veggies. 😀 This book has all the veggie names in Filipino and identify them in his meals too.  By the way, the book also has carrots & potatoes.  Have you noticed they’re not in the original song? Hehe. I just hope that someday Riley doesn’t fall asleep when they sing Bahay Kubo in school. 😀 5. Kulay!
Illustrations by Eli F. Camacho
Published by: Adarna House
Kulay is a bi-lingual book about colors featuring a carabao! Don’t get me wrong, we also have a lot of books published from outside the country.  However, I realized that Riley easily picks up whatever it is that he sees in real life so I got this book. 😀 6. The World Around Me
Published by: Adarna House
This is another bi-lingual book has photos of every day objects in a typical Filipino home.  😀 8. Animal Games
Poem by: Lara Saguisag
Illustrations by: Aaron Asis
Published by: Anvil Children
Translation to Filipino by: Eugene Y. Evasco
The book contains a poem about the playfulness of kids and is meant for an exciting read out loud activity. 😀 The book has wonderful illustrations so I bought it even if it’s still for kids ages 6 and above. 😀 9. Ito Ang Diktadura
Idea & Story: Equipo PLantel
Illustrated by: Mikel Casal
Translated & Reprinted by: Adarna House
I was intending to go when this book was launched but I was chasing deadlines then. Huhu.  I saw this book online and I’m pretty happy this was translated & distributed by Adarna House.  ‘This is Dictatorship’ is a well-renowned book in Europe.  The illustrations are kid-friendly but the message is for a lifetime.  We can all really learn something from history.

Well, that’s just about our book haul!  We didn’t get to take lots of pictures but we also played with giant Lego, happy to have met friends as well as babies at the MIBF.  😀 The hubby was a happy kid inside while we were going robotics booth hopping.  It’s a really exciting venture too: kids getting into electronics, computer codes, physics, being creative with modules and entrepreneurship!  Well, should we ever get to the day that we start building robots, that will deserve a separate blog post! 😀

To anyone afraid of having kids (this is me talking to myself 5 years ago), it does take a lot of work but the real plus side is, you get to experience the world again through your child’s eyes and it’s wonderful! 😀  Okay, I’m not really out here to convince you to have kids, just a random thought while playing with sock puppet books, taking on different voices while forgetting that I’m in the middle of the crowd. Hehe.

Also, another random thought about the MIBF,

Isn’t it amazing?
The MIBF.
Introverts (like me)
happily joining crowds? ??

By the way, if you’re bringing your baby to the MIBF, they will exempt you from the long line at the entrance! *Yes!* 😀
Last but not the least, we were super happy to have met the 501st Legion!  We entered SMX, got called by the guard so we don’t have to line up, The Star Wars Soundtrack was playing in all of SMX and people were running to get photos of the Storm Troopers and the Star Wars gang! *Currently ducking because I know ‘Star Wars’ and ‘gang’ shouldn’t be in the same sentence*  These guys walked past us and most of them said hi to Riley! *Oh the benefits of holding a toddler in your arms.* 😀 Speaking of, there will be a  Into the Jungle Baby & Kids Fair from September 27-30, 11am-8pm.
This is a great time to buy stuff for kids or even for Christmas gifts! So many brands will be participating:
Mothercare (a good chunk of Riley’s baby clothes), Cath Kidston, Cotton On Kids, Baby Bench, Mustela,
Philips Avent (mostly Riley’s bottles), Pigeon (Riley’s very practical baby food maker), The Parenting Emporium
(for breast pumps), Tiny Buds (we love their bottle cleaner), V-tech & more!  Well, see you at the #BenchBabyFair
in a week’s time! 😀

That’s all for now! I have to cut this short as we’re going on a mini roadtrip in a bit. 😀

P.S. If you’re a mom or a new parent, here are some posts that you might enjoy! 🙂
5 Lessons from Pregnancy My Younger Self Could Have Used
Work-Life Balance & Self-Care
Let Love Flow with BabyFlo