Start Your Year Right: Help the Yolanda Victims of Iloilo 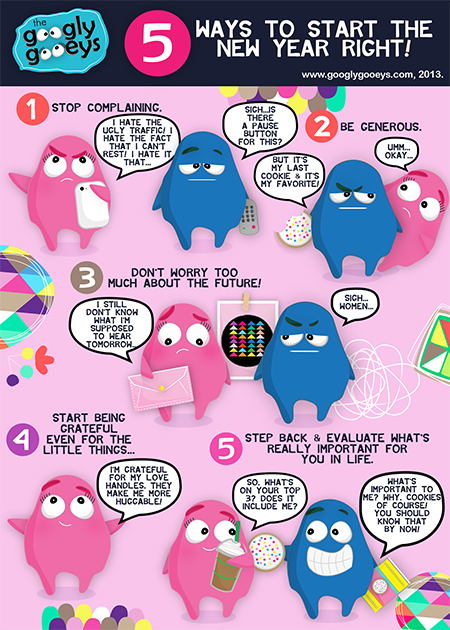 Ahhh! This is it! It’s 2014.  I can’t believe I’m writing twenty fourteen.  It feels like such a weirdly futuristic date.  Well, the holidays are almost over and those days of eating, sleeping & meeting people will soon be over.  I’ve never had this much sleep in my life!  Every year, we pretty much know what happens to new year resolutions. But, can’t we just give it one more try? 🙂  Here are 5 ways to start the new year right: 1. Stop Complaining – While it’s probably healthy to vent a bit once in a while, if you’re just ranting the days away, you’re not just damaging your mood but sadly, you’re also affecting the people around you.

2. Be Generous – According to the second most reliable source of facts, Twitter quotes *sarcastic* (next to Wikipedia, the most reliable internet source ever), spending money on others will make you happier than spending it on yourself. So, don’t be afraid to be generous! Discover the benefits of giving here.

4. Start Being Grateful for the Little Things – There are a lot of things that we take for granted every day such as getting to eat food (more than we actually want to), or being able to sleep comfortably at night.  Being grateful for these little things will help us handle life’s little glitches.

5. Step Back & Evaluate – Everyday, we’re bombarded with things that we should have or how we should look and it really gets stressful at times. Evaluate your priorities. What are your values? Do you share the views of the majority? What makes you happy?  These are questions that only you can answer and once you’ve answered, will give you a peace of mind. *Okay, I think I’ve officially turned this into some yoga-ish/ zen / self-help site. ;)*

And, speaking of starting the year right, here’s an opportunity for you to start your year on a positive note:

Last November 8, a supertyphoon by the name of Haiyan (locally known as Yolanda) hit the Philippines. The Visayan region was badly affected. While places like Tacloban & Samar were highlighted by the media, places like the fishing communities of Iloilo & Coron have not been given as much spotlight. I don’t know what’s with me but when we’re traveling, I always need to get a sense of where I am.  Above is the island of Iloilo, if you will notice, it’s the eastern coastline that got devastated by the typhoon coming from the Samar, Leyte region.

Speaking of stepping back a bit, last December 12, together with some friends in the blogosphere: Richard Co of Tales from the Tummy, Chuckie Dreyfus of All Chucked Up! and Yen Dreyfus of The Tummy Traveler, through the generosity of Air Asia Zest, Ponggo & I were able to visit Iloilo. Thanks to a group we love to call “KTG”, a total of Php 56,000.00+ in cash donations, aside from the 500 toiletry kits and numerous boxes of water & crackers were brought to the towns of Sara & Carles. We were lucky enough to catch a sunset flight & arrived in Iloilo 15 minutes early. Thank you so much to Air Asia Zest for giving up 5 seats for us.  Christmas is a peak season where people in the Metro would visit their respective provinces. So, thank you, thank you for generously flying us to Iloilo for this relief effort.

Upon arriving, we went to the nearest supermarket to buy the relief goods while guided by the staff of the Iloilo provincial government as to which goods to buy. We ended up buing sacks of rice, noodles (which we’ve been told is actually convenient for relief efforts as they can be eaten cooked or raw), coffee to keep the victims warm, crackers especially for the kids, wafer (which the relief workers have discovered were being used as an alternative viand for rice by the victims after having sardines day in & day out for so many weeks), and packs of instant cereal, which, with water, can function as a drink & meal at the same time. We left the relief goods at the provincial Capitol before going back to our hotel. The next day, we were headed to the town of Sara & Carles.  We were accompanied by Harold Agustin Sonza Ziegenhohn, the Senior Tourism Operations Officer as well as the other representatives of the Iloilo Provincial Government.  We were almost able to fill up a dump truck of relief goods.

We passed by the public market of Sara and saw with our own eyes the scope of the damage of the typhoon.  On the road, there were also electric posts leaning diagonally as well as coconut trees with leaves all on one side due to the strong winds that hit the town.  Take note that this is already a month after the calamity. Above: The Sara Public Market after Typhoon Haiyan

We were greeted by a very grateful and teary-eyed representative of the Department of Social Welfare & Development, Marilyn Sara from the same city as her surname.  She is currently handling 42 barangays under her wing.  She said that while all 42 barangays have already been given relief goods.  However, the tricky thing about it is that it continuously gets consumed so there’s always a need to replenish. Weeks before the trip, I only knew that we were going to Iloilo, I didn’t even realize that I was going to my grandma’s hometown where my great grandfather used to be the mayor for three terms.  I heard the terms “Sara” and “mayor” while growing up but never really had a concrete visual of the place.  Things just came in full circle and I’m grateful to have had the chance to visit my great grandfather’s town through this journey. We then headed to the town of Carles, Iloilo.  I was a bit confused at the start.  Words like “resort” and “relief” were being thrown around.  I didn’t know how these were to fit into the story.  Apprently, we were going to the Blue Lagoon Resort owned by the generous couple Timothy & Cecil Lynes.  Since the town of Carles was devastated and so was their resort, they volunteered their place as a relief center. Currently, the Korean Red Cross, with 4 doctors & 7 nurses, are camping in their area.   Timothy Lynes was a former member of the International Committee of Red Cross no wonder that the relief efforts in this area is very organized even with a complete list of residents and representatives. It took us three hours to reach this place and take note that the roads have already been cleared.  Now I understand why, on a national level, it took a while for the initial relief efforts to get to all the coastal towns.  Houses have been destroyed in this area and what is more heartbreaking is that the fisherfolk cannot go back to the sea just yet because the waters are still not safe for fishing.  Because of so much debris that has been washed away into the water, seafood is still not safe for human consumption. Left: Dump truck with relief goods | Right: Hopeful residents wait for their names to be called.

All in all, it was really nice to see everyone come together and witness the whole process first hand from the call for donations to the procurement, repacking and finally the distribution of goods. Sometimes, you think, “But this is what I can only offer”. However, if everyone actually comes together to do something worthwhile, lives are changed.

With that, again, we’d like to thank Jonathan Yabut of Air Asia Zest for our plane seats, to the Harold Ziegenhohn of the Iloilo Provincial Government who has arranged this trip to the provinces, to The Blue Kitchen for the 500 hygiene kits, 48 bags of biscuits from Tales from the Tummy, 15 biscuit tins from Mucking Around Manila, 150 water bottles from The Tummy Traveller, Php 15,000.00 cash donation from Beyond The Box, Php 41,000.00 in cash donations from the from anonymous donors.

Iloilo definitely needs your help and they’re currently shifting from relief to rebuilding programs.  It’s been almost two months since Haiyan but we strongly encourage everyone to donate in their own little way building materials like G.I. sheets, nails & construction tools.  Cash donations are also accepted.  Help the Yolanda victims of Iloilo & get in touch with the following:

Thank you in advance! Remember, a little help always goes a long way! 🙂