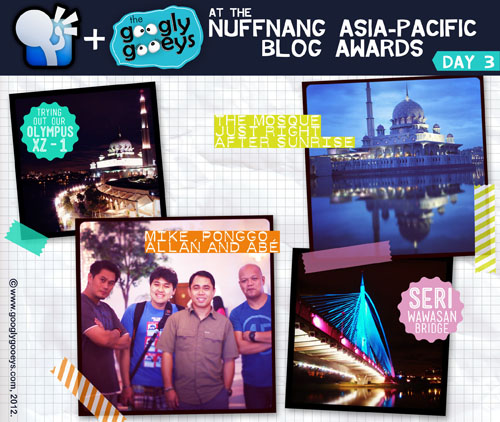 Day 3 of Nuffnang Asia-Pacific Blog Awards and it’s a we’re-free-to-go-wherever-we-want-to day 😀 The boys ( Mike, Allan, and Ponggo all decided to get up at 5ish in the morning for a photo walk just before sunrise. You see, the three bonded even before we left the Philippines over a discussion on airplanes and carbon fiber camera tripods.

The three boys also have this thing about huge landmarks. They always go, “Let’s go there. It looks so near!”. They always end up walking for at least half an hour! In awe of the structure in front of them–the Putra Jaya Mosque–they all decided they should get near it. It was going to be a short walk anyway. Little did they know that it was not going to be that easy because they have to go around the Prime Minister’s palace to get to where they want. At one point, a police car was even monitoring them closely. They didn’t know that the area they were in was off limits!

The boys went back to our hotel just in time for breakfast. After breakfast, we all went to Kuala Lumpur. The boys now with Abe all went to Low Yat. According to our fellow Nuffies, they were like kids inside that place–so overwhelmed to see all the gadgets being sold. The girls–me with Helga and Camille–went to the Pavilion mall. I got to shoot some photos for Camille’s blog post again. 🙂 And look at Helga in this picture, she poses effortlessly in front of the lens! (On a side note, check out her super creative self-portraits here >> this one’s my favorite!)

I really enjoyed shopping at Pavilion especially at Typoshop. They had lots of colorful and quirky things! Helga ended up buying a couple of planners while I ended up bringing home wooden letters. I really wish some business(wo)man could bring the Typoshop to the Philippines ASAP! I even tweeted them about it. Hehehe.

After the separate shopping sessions, Helga and I were finally reunited with the boys and went to the Putra Mosque to join them in their last photo walk session. Here are a few snaps by Ponggo. He requested that I do a gif of the bridge shots he took so I’m leaving you guys with this! 🙂

P.S.  I’ve said this so many times but thank you Nuffnang for this super fun trip! 🙂