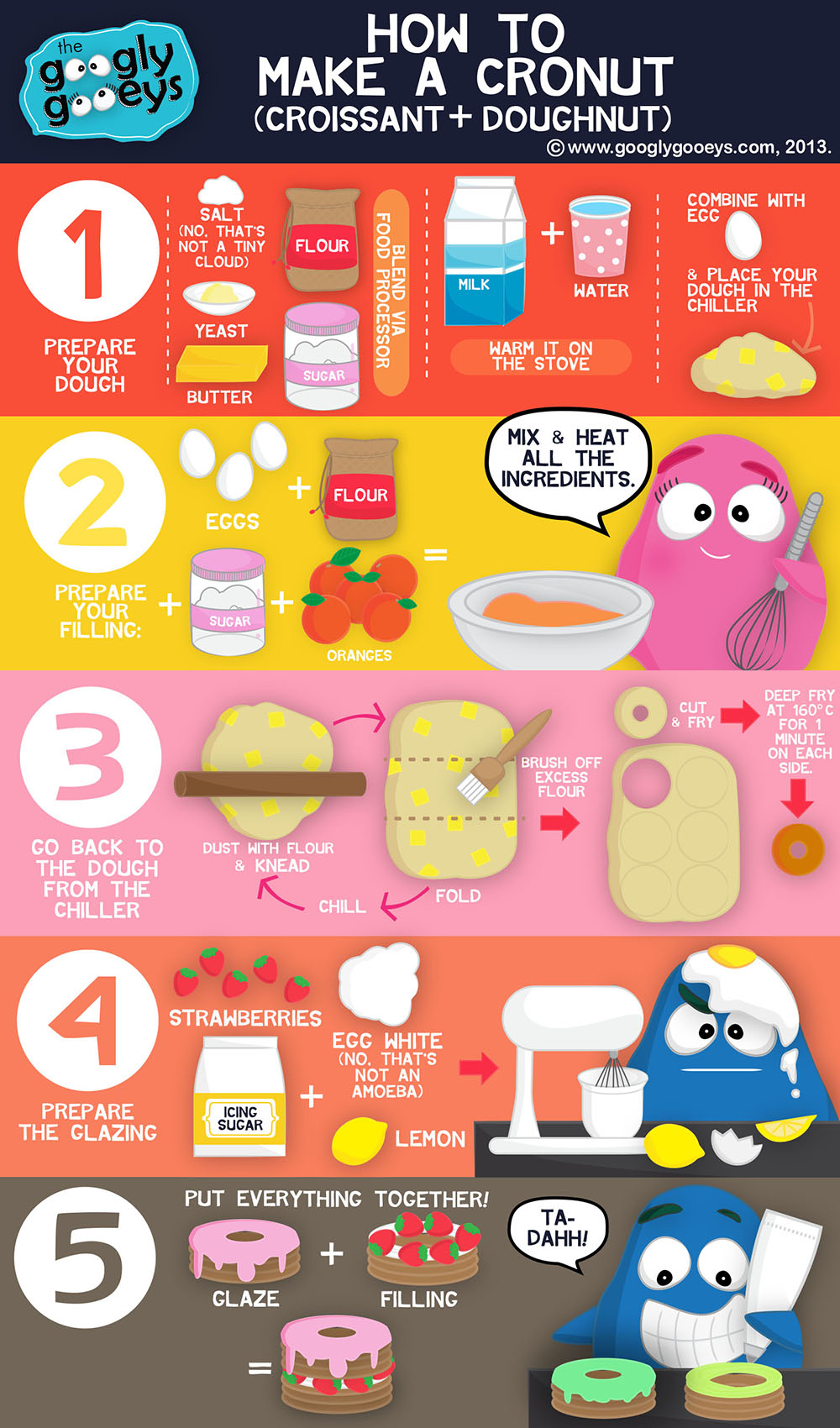 Hello Guys!  For the longest time, Cronut™ was a term that was being used loosely to refer to any croissant-dougnut hybrids.  It was a term that was being thrown around the internet as well as bakeries coming up with their own versions of the original Cronut™ invented by Dominque Ansel.  However, as it was pointed out by Dominque Ansel’s Press team via e-mail, it was brought to our attention that croissant-doughnut is the generic term and the term “cronut” should not stand alone and should be addressed as Cronut™–a trademark of the Dominique Ansel Bakery.  We would also like to clarify that the recipe here is only that of a croissant-doughnut hybrid inspired by the original Cronut™ recipe.  Now, I understand why Chef Marc Chalopin of the Enderun colleges–the one who performed this demo refused to use the Cronut™ term throughout the session.

This post has now been updated and Cronut™ now refers to the single item in Dominque Ansel’s bakery.

Croissant-doughnuts are such a big craze these days as inspired by the original Cronut™ by Dominque Ansel’s bakery and people have been lining up just to get their hands (and teeth!) on the croissant-doughnut or versions of it.  I just witnessed how the croissant-doughnut hybrid goodies are made & I now have a new found appreciation & respect (bordering on worshiping) croissant makers in general. According to a bunch of friends, it’s difficult to make croissants.  The process is really really loooooooong and if you’re not too careful, you might have to throw out the days’ worth of work. *Oh noooo!* Yesterday, I watched Chef Marc Chalopin of the Enderun Colleges share his croissant-doughnut recipe.  I actually took down notes–lots of it.  The process is actually more complicated than you think.  First, you need to make sure that you don’t mash the chunks of butter in the food processor nor during the first time you knead it.  Then, when your warm your mixture of milk & water, to see to it that you’re warming it & not heating it, you should put your finger inside the sauce pan.  Haha!  I actually enjoyed the fact that Chef Marc has a good sense of humor.  For instance, somewhere between preparing the filling, he still manages to share the time when he accidentally used salt instead of sugar.  Oops! Upper Left: Cutting the Dough Upper Right: Glazing the Croissant-Doughnut Lower Left: Oh, so, this is how you cut your strawberries properly to make them look more presentable!  Lower Right: The Rise of the Croissant-Doughnuts–literally!  Chef Marc says you may put lots of yeast if you want to make money out of these but your tall pastries would taste differently 🙁 Upper Left: Glazing each croissant-doughnut Upper Right: While others would infuse the filling directly into the croissant-doughnut, Chef Marc chose to cut them into two.  Lower Left: Speed-doodling session by yours truly so that I can properly share the facts with you.  *Whew!* Take note though that there are specific number of minutes, intervals, number of times you should fold your dough, how thick it’s supposed to be–let the infographic at the start of this post serve as a guide–not as a recipe.  😉  Lower Right: Voila! The finished product! Upper Left: Sea of croissant-doughnut before they disappeared in minutes!  Upper Right: Do you see the chunks of butter on the dough? That’s the proper way of kneading–you’re not supposed to mash them deliberately but they’ll just blend in after x times of kneading & folding 😉 Lower Left: Cracking an egg with one hand–a skill that I…do not possess!  Lower Right: Color overload!  I was an excited electron when chef took out the bag for piping.  I knew the fun part just started. 😀

To make croissant-doughnuts, here’s what you need. This is what Chef Marc used to make 6 cronuts: Left: Top view.  A colorful & neat workspace! I don’t think my table ever looked like that.  Mine just always looks like a typhoon aftermath.  Right: Pistachio on Pistachio! 😉 How meta. Above: Smile croissant-doughnuts! Everyone’s trying to take a photo of you!

As soon as the demo ended, the crowd finally approached the area.  No, they weren’t there to grab the sweet & colorful pastries–it was a mass Instagram session! Haha.

All in all, it was one sweet & colorful day for the flaky yummy (and sinful!!!) croissant-doughnuts!  People over Twitter have been asking if Enderun offered classes outside their college courses & yes they do, they do, they dooooo! ❤  Apparently, there’s a pastry workshop on August 9.  They’ll be making coffee eclairs! Ooooh! There are short courses too–by short, we mean anywhere from 5 days to 3 months!  Check out EnderunColleges.com & EnderunExtension.com for more details 🙂

P.S. For more comics about food, check out these posts: