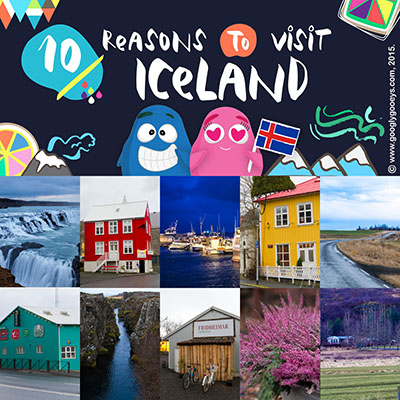 I still can’t believe that we’ve been to Iceland.  It still feels like a dream except for the fact that I have pictures to prove to myself that we were really there!  It has been on my bucket list for the longest time but it always seemed impossible!  Booyeah!  Anyway, I’m incredibly paranoid while I’m writing this post.  You know when someone is so in love they start sounding cheesy?   I love Iceland so much and I don’t know how Icelanders will find this post if & when I start romanticizing things. Hehe. *Runs & hides.*

But as much as I’d like to edit my thoughts, I can only write from my eyes & heart. *See? I warned you!*  Here are 10 reasons why you should visit Iceland this 2015.

1/ Iceland will restore your faith in humanity. – Ever heard of a place where they don’t lock their car doors?   Some don’t even lock their houses.  The Prime Minister’s office doesn’t have grills around it.   We didn’t even see any guards.  We were so close to knocking & saying hi. 🙂 Of course we didn’t! Also, our guide from Icelandic Mountain Guides also told us that you can practically camp anywhere if you want as long as you don’t build a permanent structure.

Then, according to the book What the Dog Saw by Malcom Gladwell, in New York, to prevent graffiti artists from ruining the trains in the subway, they had to repaint the trains every single night to pretend that it never existed thus discouraging the people from continuing their activity in the long run.   But, in Iceland, our guide shared that murals such as this were commissioned by the government to prevent random graffiti and instead channel the energy into something more constructive and productive.   I guess that’s what happens when you live in a country with so much free energy.  You learn how to harness it properly instead of fighting it. 😉 Finally, Iceland is a tourist-friendly place because while Icelandic is the national language, most of its residents are very fluent in English.  And oh, you can just always opt to pay with credit card instead of worrying about changing your cash to Icelandic Kronur.

2/ When you visit Iceland, you get to meet those who shaped their history.  Nope, they’re not kings, queens or emperors but you can say they also loved to make it known that they were powerful and their homes were grand.  Come to think of it, you can say they’re immortal. Give up already?  These are  volcanoes, glaciers, waterfalls, geysirs.  All of these have been there since the dawn of time.   🙂 *Sigh. I sound so cheesy!*

We were touring with Icelandic Mountain Guides and driving near the Eyjafjallajökull and our guide pointed out how the walls were built over the centuries with alternating eruptions inside and outside the glacier. Above: The two tectonic plates at the The Þingvellir National Park where, incidentally, somewhere near this place, the first Parliament of Iceland was established.

3/ Iceland has the best-tasting tap water in the world. – Okay, I’m exaggerating when I say “in the world” because I’ve only been to 16 other countries out of the 193. But, it’s sweet and it definitely reminds me of the glacier every time I drink water.  Hahahaha.  I miss it terribly too!  Now I’m starting to think all the water I drink is bland or maybe I’m just having some prolonged serious episode of separation anxiety.

4/ Iceland is like visiting another planet although you’re still technically on earth. –  Iceland’s weather & topography is unlike most of the world’s.  Last November, we only had 6 hours of sun.  In December, Iceland gets only 3-4 hours of sun while they get 24 hours during the summer.  12% of its lands are covered in lava fields.

Another question everyone has been asking is if the whole country is covered in ice.  Well, it isn’t but 11% of it is glacier.  I know what you’re thinking about & I think I may just have found the best photo for you to illustrate this: I wish this was my shot but it’s not. Hahaha.  It’s a photo of Iceland from outer space. This is just one of the photos on our blog that we posted that isn’t ours.

Okay.  You may close your mouth now.  Continue reading. 😉

Iceland also needs to import their bees to pollinate their tomatoes in greenhouses. Wow, I was just thinking that there’s just so much that I’ve taken for granted.  I was joking that I’m very willing to donate some of our sunlight & bees! Above: One of the sweetest tomatoes we’ve ever tasted. Over lunch, people were teasing Ponggo because he’s basically a carnivore but he ended up snacking on tomatoes and consuming 4 bowls of tomato soup at the greenhouse!

Below are some of our favorite snaps from the Friðheimar Greenhouse.  The whole place can be controlled via a single smart phone!  It’s like managing your own ecosystem and they always make sure that the tomatoes have the best conditions to grow. 5/ Iceland will make you question if you still ever want to go back to your life in the city. The country has a population of 330,000 people and  Reykjavik, its largest city has a population of 118,000 which means that you have the rest of Iceland to enjoy for yourself.   Just imagine how much of a heaven is this to the rest of us who have to get stuck in traffic day in and day out? Above is the Harpa which is a concert hall and a conference center.   Ponggo & I were joking that if this was in Manila and you opened your shutter that long, all you will get are aperture stars and bright lights because of the traffic.  In cities like Hong Kong, you’ll probably need just a few seconds and you’ll get lines because of the volume of cars.  But, in Reykjavik, you can just chill (pun unintended), check both sides or the road and check if there’s actually enough vehicles coming from both sides before taking the picture.  Reykjavik has the convenience of a city sans all the stress that goes with it.

6/ In Iceland, everything is quirky.  – Actually, I wasn’t the one who originally said this.  I was with my Icelandic Mountain Guides Golden Circle Tour group and I pointed out to an American couple that our hostel was quirky.  Then, he answered, “In Iceland, everything is quirky”.  Then, that’s where I started to see it.  Reykjavik looked like one of them places that a color-loving illustrator designed, snapped her fingers and made everything come to life.  *What did I tell you about me & romanticizing things? Haha. But it’s truuuueeee! Just look at the photos!*

Above is the view from the balcony of Loft Hostel in Reykjavik. (Also, it isn’t helping that what’s playing in my iTunes is the opening song from the soundtrack of 500 days of Summer because it’s making me miss this place more). As usual, I managed to send some postcards to some Instagram followers, friends, relatives and…myself! 🙂 Above is actually one of them photos where Ponggo was  telling me, “Can we just please cross the street and take pictures later?!!”  But of course, here I was like a firefly–the type who loved colors–and lost sense of time and space with beaming eyes and a camera in hand.

7/ Iceland is the embodiment of a paradox. – I never thought that fire and ice can co-exist.  I thought that cold countries were all about ice and snow and warm countries like ours are all about beaches, coconuts and summer 365 weather. Here are photos of the Solheimajokull glacier.  Glaciers are made of compacted snow throughout the years.   I converted these scenes into black & white so you can see the contrast.  You’re curently staring at ice and volcanic ash!

8/ In Iceland, you will learn how to work with nature.  – As I’ve mentioned, because of the existence of powerful waterfalls and active volcanoes, they have geothermal and hydroelectric power plants.  In some places, it’s even possible to bake bread underneath the soil.  I kid you not.  Also, because of the movements in the earth, it is possible for a spring to appear in the middle of your living room or in your backyard. Above is Gullfoss, one of the stops during our Golden Circle tour.  It is said that the place was supposed to be converted as a hydroelectric powersource.  However, a brave woman by the name of Sigríður Tómasdóttir prostested against this which is the reason why Gullfoss was able to preserve its beauty.

If you will notice, the woman’s name ends with “dóttir” which is Icelandic for daughter.  The locals don’t have “real” surnames in the sense that their last names are composed of their father’s names plus “son” or “dóttir”.   I asked how they’re able to track who their relatives are if this is the case.  They told me that their families are really close so everyone pretty much knows each other.

9/ Iceland will remind you that and the end of the day, Mother Nature has the final say. – We’re always so used to scheduling everything: the number of minutes or hours it takes for us to get to work, a finite number of minutes for lunch, minimum and maximum number of hours for sleep.  Sometimes, I even find myself breaking down my day down to the last 30 minutes just so that I can maximize it.  But, Iceland will remind you that Mother Nature has the last say.

We were planning to do some whale watching via Special Tours.  It was windy that day so the company has decided that we set out from a different point.

We spent minutes in the sea but the weather proved not to be very ideal for whale watching.  Because safety is the primary concern, we no longer proceeded.  The staff of the tour group were apologetic about it even if everyone knew it wasn’t their fault.

That night, the Northern Lights by boat tour was converted to a bus tour because according to Iceland’s weather forecasting site, the seas were rough that day and that the opening in the sky will be somewhere in the southwest of Iceland.

You see, if it were a Broadway show and something happened backstage, the show must still go on.  But this is Mother Nature.  So, we sat and waited for the lights to show itself.  It was a humbling experience–a true reminder that we’re not the rulers of this earth.  Despite the fact the lights weren’t as powerful that night, it was nice to have seen a glimpse of it through our cameras.

10/ It’s not just a stopover. – I like how IcelandAir markets it as a stopover.  If you’re going from Europe to the U.S. or vice versa, IcelandAir won’t charge you if you spend some days.  Then again, for me, the word “stopover” is so underrated.  Or, maybe, that’s just the whole point of the hashtag #MyStopover…because it isn’t!  After reading all the 9 reasons ever, I’m pretty sure, that by now you’re convinced that this 2015, Iceland should be on your travel list!

P.S. Thank you to the following for making this trip possible!

P.P.S. Can’t get enough of Iceland?  Check out our Glacier Walk & trip to the Blue Lagoon geothermal spa here. 🙂

Related Posts:
Travel Coloring Book: Around the World with the Googly Gooeys
Paris Photo Diary
10 Things to Do In Florence & Finding Your Art Style
Our Lucky Day in Rome
Postcards from Tuscany
Why You Should Travel Alone
Clumsy Girl in Venice