Excuses not to Exercise 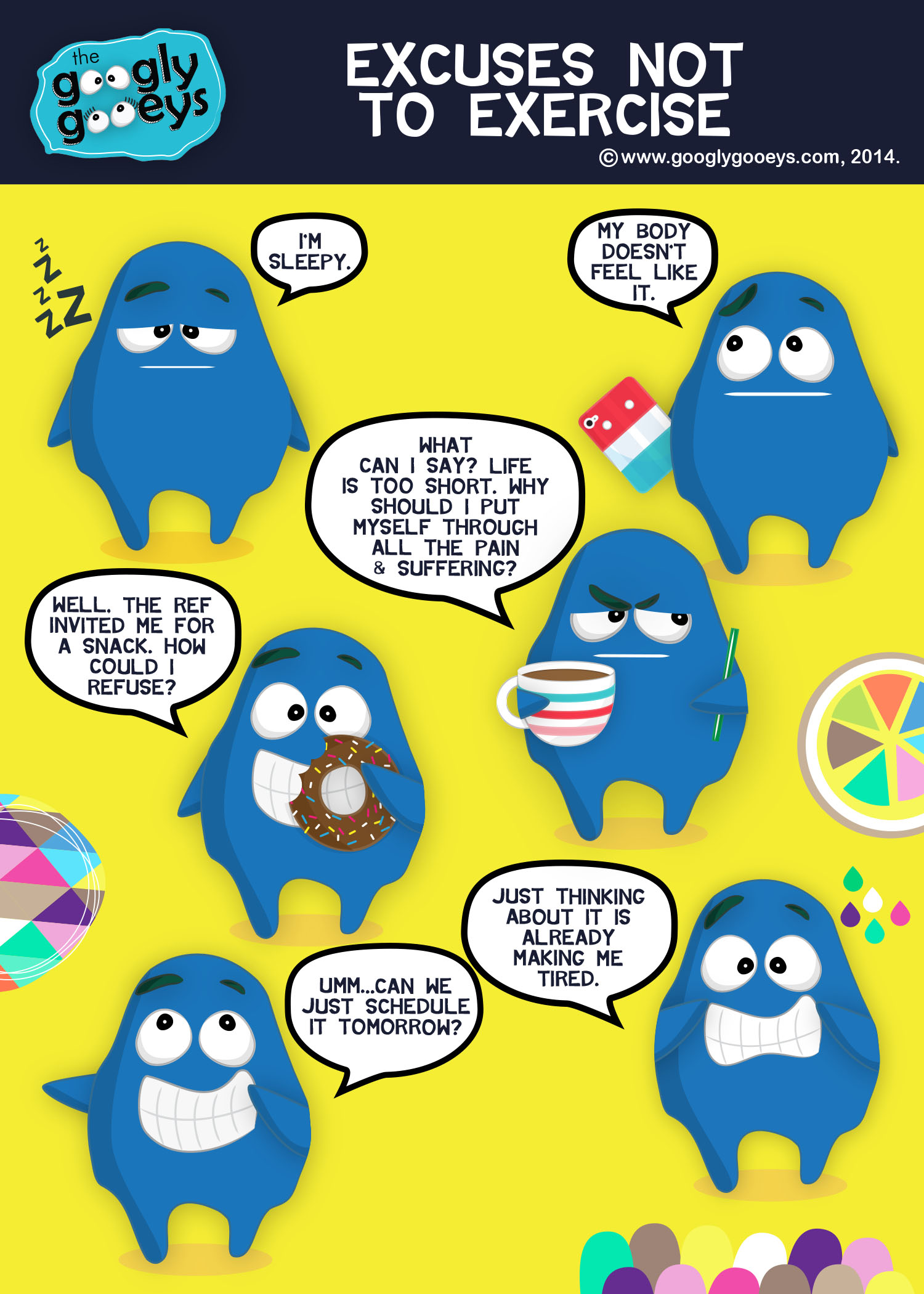 I started doing the graphics for this comic while I was waiting for my exercise class yesterday.  Yes, I can’t just go to the gym alone because once I feel any pain, I stop. Hehehe. At least, in a class setting, I can’t just go out in the middle of the class & I have to finish the whole session.

I’m usually excited about attending these things somewhere between 12-24 hours before the scheduled time but, as the class approaches, I usually feel somewhere between lonely & wanting to walk away.  I usually come up with tons of excuses not to exercise.  “I don’t know why I put myself through all this pain & suffering!”, I would start to think.  On certain days, even when I’m already settled on my mat with my towel, bottle of water & weights, in my mind, I’m either panicking or wanting to leave the room. During the exercise though, I’m too busy too think of anything because I’m  focusing on my breath & trying to survive the class while ignoring all the burning that’s creeping up my thighs. But of course, after the class, with a sweaty shirt, wet hair and an almost empty water bottle, I know I’m ready to attend another session soon. 🙂

Anyway, excuses aside, it’s always amusing when we’re finally able convince ourselves that we want to do something and we put our mind into it.   For instance, If you’ve been reading this blog for awhile, you’ll know that Ponggo doesn’t like waking up early.  For him, “morning” is 9am or 10am while I’m usually up anytime from 6:30 to 8:00 am whether or not I have to go to the office.  Yesterday, I told him that for some reason, we have a golf ticket for today.  Tee off starts at 6:30am.   Since it looks like none of us could use the ticket, I told him to contact anyone who wants it.  To my surprise, he told me that he’ll be leaving the house by 5:30am.  I actually forgot that this night owl I married refuses to wake up for anything except for (a) the opportunity to get a sunrise shot or (b) golf.  Otherwise,  he’s oblivious to the fact that I’m dying of an excruciating tummy ache or I have a roadside emergency very early in the morning. *Sigh*

Anyway, going back, I did a doodle about that exercise class I’ve been attending for a few months now.  I don’t know if it actually looks like what it’s supposed to look like but you’re supposed to be somewhere between squatting with your weight on your toes then you start pulsing.  I guess it’s easier for me to write about it now because I won’t be attending any classes today.  I don’t have to deal with any excuses yet in my brain stopping me from attending another class! Not yet…. 😉

P.S. More stuff about excuses & exercising here:
Exercise (Or Something Like It)
Exercise: Before & After
Post-Workout Resolutions
100 Happy Days
What Happens to New Year’s Resolutions
Five Excuses Guys Give When Caught Looking at a Girl
Fact of the Day #59: Some excuses are simply overused.
Creative Excuses for Gaining Weight